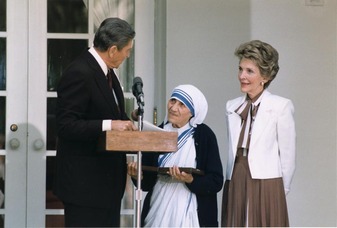 Many events had shaped Mother Teresa’s life. The most important event of all was her calling to become a nun at a young age and when she was old enough, she joined the Order of Loreto sisters in Ireland and began her work in Darjeeling, India. Without Mother Teresa accepting her calling she would of never went on the mission to help the poorest of the poor and dedicate her life to God and the service of others. On her journey she had become a teacher at St Mary’s High School in Calcutta from 1929-1948. When she felt that working at the school was not fulfilling her calling she received permission in 1948 to serve outside of the school to help the poorest of the poor out in the streets of Calcutta. This also is an important event as if she was not granted her opportunity to help the people of the streets in Calcutta. She would never of had established the Missionaries of Charity in 1950 in Calcutta and the charity would of not expanded around the world to help others. Below are the dates of some of the Charities and hospices/homes that were opened to help the poorest of the poor:

From starting off with accepting a calling, Mother Teresa’s work expanded around the world and everyone had knew about her strong dedication in serving others and God. If she had not accepted the calling, would the world be the same today? Would there be hundreds and thousands of people working together to build hospices to help other people? The answer is unknown but if it weren't for Mother Teresa, there may have not been a message conveyed to help people who were disabled, diseased and abandoned and there would not be hospices or the Missionaries of Charity assisting people around the world.
"Do not wait for leaders; do it alone, person to person.” Mother Teresa
Due to her strong dedication of service she was acknowledged by her efforts and received many awards from around the world.